One of my clients, based in Bristol, is in his 80s. He was having some issues with TalkTalk – the line wasn’t so good or something. About the same time, a call came in, claiming to be from TalkTalk. They were offering to help, and they convinced my client to type a few things into his PC. It turns out, it was TeamViewer being installed.

They got him to reveal the codes and passwords, and quickly remoted in. While they were in, and this is another clever bit, they had my client writing down several long numbers and letters – made up – just to distract him from what they were attempting to do.

Part way through, luckily, he became suspicious and turned his PC off. They were not happy. They tried everything to get him to switch it back, sometimes becoming angry and aggressive on the phone.

We’re not sure which country the call centre was from, my client thought they sounded from India or Bangladesh, but that could be from many different countries.

Is enough being done to stop this? I don’t think so. If anything it’s getting worse.

I advise my clients to trust no-one who calls. Wait several days, and then if you think there is an issue or a need, call the company direct. By then you will have really thought about that call, and what was said. You will realise it was a scam, or will call the correct number and get to the bottom of it. The same can also be said about emails that come.

We’re forced to have quite a cagey/guarded mindset on the phone, and with email. It is because there are so many scams going on. They prey on the older generation who tend to want to be polite and are not used to this happening.

Shredding data before you give your PC away…

Your old PC was full of your data.  Maybe you had all your family photos, a copy of your passport that you scanned in when you bought your flat?  You might have an excel file with your pension details?  List goes on.

So when it comes round to getting a new laptop or desktop, you might want to give your old one away.  A family member/friend or perhaps a charity could benefit.  You delete all your files – OR HAVE YOU?  There are many methods of reading a drive and recovering the data.  Only the criminals are really interested – but with some key information, they could make your life very complicated.  It might even cost you some money.

One service we offer is to move you from one PC to another.  When you are happy that you have all your data – we can SHRED the remaining drive/space so that nothing can be got back.  If they scan your system – nothing, it’s been written over. 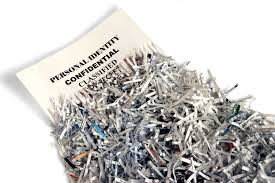 Helped a client recently with a TV issue.

The Sony Bravia was setup using WiFi, but the iPlayer was forever pausing and stuttering on playback.  The router was close, just one wall away.  First thing, we hard wired the TV with an Ethernet lead and reset the network wizard.  Tested, got the same “infinity circle” between sporadic video playback.

Then we downloaded an uptodate firmware.  The automatic download said it was “uptodate” but there was a newer version on the internet.  We downloaded it and copied over to an USB stick.

Once we had upgraded it, and iPlayer still did exactly the same.  Back to the shop for a replacement!!

My company uses Office 365 for many things, but mainly email.  We, and many clients use other software, such as Encore for Estate Agents, accounts packages, marketing databases etc.  I use QuickFile for accounts.  We want to send out email using our normal business email addresses, but it always gets marked as spam.

The way round this is to use Microsoft’s Office 365 smtp servers to send your email, using your Office 365 username (email address) and password.  That way your email is sent using the correct SMTP servers.

We’re not website designers or programmers, but we do understand emails systems and the anti spam systems that are now needed.  There is a lot of spam out there, some just marketing, and some nasty and carrying fraudulent

We have one client who has a Word Press contact form on their website.  A potential client can fill out the form, with their name, email address and a short message.  They have an anti “bot” addon too.  When they hit submit, an email is generated to go to my clients email address.

The source of that email is the email address that the new client has entered.  The problem is, the email DID NOT COME FROM THE SERVERS THAT MAINTAIN THAT EMAIL SYSTEM.  The server than generated is the where the website is hosted.

Any email system with a degree of spam control checks the address of an email, and where it has come from.  It then checks where is SHOULD HAVE COME FROM.  If it matches, legit email.  If it does not, SPAM or JUNK.

The solution would to send the form from a fixed address, one of your own.  You also need to send it using the correct SMTP servers.  It has to come from the actual server it is meant to come from. Office 365 email from Microsoft servers, Gmail from gmail servers etc.

The link below might help with the technical aspect of what we said above. 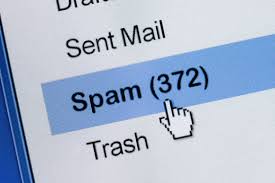 Dropbox app not connecting to sync your files

If you use Dropbox and Eset Security products, you might have noticed it has stopped working and files are no longer syncing – something about cannot make a connection using SSL or something.

Run this update from the link below, and it will fix it for you… 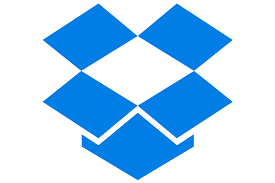 Phishing email – sent to me today!

I have just received a classic phishing type email.  The hacker has worked out or guessed that I use Office 365 for my email, and they have generated the email and text below.  The actual email looks like it might be legitimate.  IT IS NOT.

They have the threat to make you “act now”, the colours and buttons similar to Microsoft, trying to disguise itself as a good email.  But take a closer view:

(1)  I have set my passwords to never expire
(2)  When I hover my mouse over any of the links – they are not from Microsoft
(3)  Who is theflowerhouse.org.uk?  It’s near the bottom of the email
(4)  “Password” is typed passw ord”

Even it was a good email, NEVER click on any of it.
Goto the website of the system you want to check, based on the actual website service, nothing from the email you received.  Login there as normal.  If they was any kind of action you need to carry out, the provider will let you know. 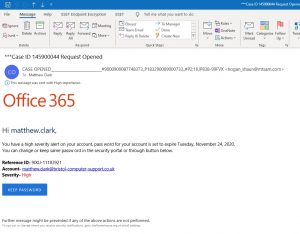 This is the text of the mail (I have not copied the links so that I do not promote their attack).

Hi matthew.clark,
You have a high severity alert on your account, pass word for your account is set to expire Tuesday, November 24, 2020.
You can change or keep same passw ord in the security portal or through button below.
Reference ID- 9IXU-11183921
Account- matthew.clark@bristol-computer-support.co.uk
Severity- High

Cybercriminals must be enjoying these times! So many people are now working from home, probably on their own laptop or desktop. IF THESE DEVICES WERE in the office, the IT department would be making sure all the patches were applied, security kept up-to-date and renewed, admin access secured away. Of course the office would be hidden behind business grade firewalls, and security systems. Fraudsters would also get stuck trying to ring in, as no doubt reception would intercept the calls.

We can make it difficult for them. Make sure your network access is secure, with a good WiFi password. Make sure the router is up-to-date. Make your Windows or Mac passwords are strong and never give them out to anyone. Indeed, make sure all your passwords are strong and different. The modern way now is long passwords, that do not change, so that you do not fall for phishing emails.

Check that your PC or Mac (or Chromebook) is fully patched and running the newest version. Yes, of course sometimes the companies roll out a bad update, but most of these updates are to combat some vulnerability that a hacker has found in the code.
Check that your security software is good enough. Too much? We can of course help with all this. 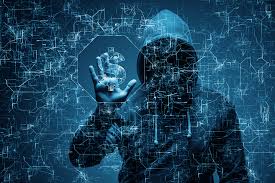 Laptop slow? We can speed it up, solid state drive installation

Most new laptop prices seem to have gone through the roof.  It seems to be related to Brexit and Covid.  It’s a bitter pill to pay, but there is an alternative solution.

Your current laptop may last 2 more years if it was just a bit quicker.  The best way is for Bristol Computer Support to replace your hard drive for a Solid State Drive.  We can fit 240Gb unto 960Gb solid states drives (SSDs) and we can duplicate your existing Windows installation.  Where possible we take an exact image of your disk drive, and write it onto the new SSD. 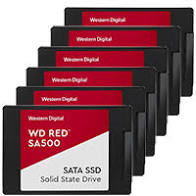 For more information on SSDs, Intel below have written an excellent document.

Quote.  An image of the older drive, supply, fit and re-image to the new drive 240Gb recently cost £130 plus VAT.  The laptop was delivered to us.

Clients previously had powerline devices, cables everywhere and randem access points placed around their houses and businesses.  With MESH, we taking all that away, replacing it with tidy and efficient MESH systems.

The largest building we have done is 7 devices, most seem to need just the 3.  The MESH devices talk to eachother and high speed, and the WiFi can fill even the furthest corners of your building.

It’s not expensive from BCS, we are happy to sell you just the devices you need, we can set them up in about an hour, plus we leave you with the APP on your devices so that you can manage your own network, and see what is going on.